Man, Republicans crack me up. They are so vocal about their hatred for all things homosexual, but half of them are trying to bang persons of their same sex. Most recently Indiana state representative Rep. Phil Hinkle was caught trolling Craigslist for a man. The man and Hinkle have different accounts of what happened in the downtown hotel room. Hinkle has denied that he is gay and said he doesn’t know why he was using Craigslist to find a dude. He apparently paid the man $80 and exposed himself, though both deny any further sexual contact. 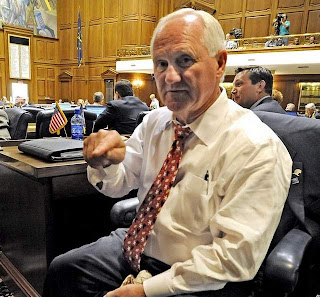 You would have to pay me sooooo much more than $80 to make the sex with this dude.

You have just read a Guest Blog from Theresa
To read more from this featured member, visit their blog at Things That Are Ridiculous
Original blog entry found at We Are All A Little Gay