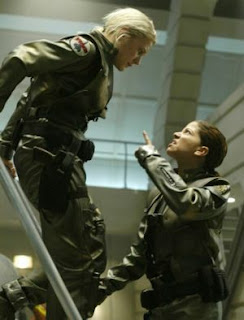 Apparently, I handle emotionally-devastating circumstances better when I put them into sci-fi terms.

I need to tell you a story about an amazing girl, who I almost missed the pleasure of being friends with.

For those uninitiated to the greatness that was Battlestar Galactica’s most recent series incarnation: Louanne “Kat” Katraine and Kara “Starbuck” Thrace were possibly the two best Viper pilots in the series. Two strong, eccentric, and indisputably damaged women who were similar in many ways. And who bickered up until the day before Kat died.

Kim and I are similar to that, right down to the sleazebag ex-boyfriend storyline.

OK, so Kim and I never flew anything. And Kat and Kara didn’t both date the same guy. Loser ex-boyfriend parallel is only somewhat similar.

We hated each other, it’s hard to overstate how much. Could. Not. Stand. Even the mere thought of each other. Mostly because we both had crappy taste in boyfriends. She dated the loser right after I did. The most infuriating thing was that even when I hated her so much, there were still things I admired about her. She was so cute it hurt. Not even I could deny that. And she was always so creative and so vivacious. Even at our most hateful times, I couldn’t deny that.

After they broke up, I think it was around June of this year… I don’t know why I suddenly was compelled to do it, but I sent her an apology for all the terrible things I’d done and said, to and about her.

Apparently, the reluctant admiration was mutual. She accepted and returned the apologies. We bonded over war-stories. The creep had put both of us through some bad times, and it was strangely unifying. We were fast friends after that. I’d only recently moved up here to Indianapolis, and money was beyond tight, so I couldn’t really afford to go see her. She had a heart condition, which recently required surgery, so she was too weak to come up and see me. We had a strong connection in a very short time, and looked forward to hanging out once she recovered. Maybe we’d go clubbing, since she’d turned 21 not long ago. Our birthdays are only six days apart. We wanted to do some way of celebrating the next one together. We encouraged each other through trials, cheered happy moments, and consoled in sad ones. It was so clear that we’d have been besties ages ago, if things had been different.

And then in July, I didn’t hear from her anymore. I’d call and get no answer. We were never on Facebook or instant-messenger at the same time. I did send her excited congratulations in August, when I saw that she’d become engaged to a guy who was actually good enough to deserve her.

I didn’t hear from her because she’d wound up back in the hospital. Her heart wasn’t getting better, it was getting worse. She didn’t mention it to me and well, neither of us were very accessible online at that time.

She was so determined, so excited about her future and so hell-bent on recovery. She described herself in her Twitter bio as “Small but fierce.” And God, it was so true. It honestly never crossed my mind, even for a split-second, that she might not get better. But in the fall, she had a second surgery which didn’t help anything. She declined quickly after that. We lost her on November 22. The worst part is that I was so bogged-down in work, I didn’t even hear about it until yesterday. She’s been gone for a month.

I’m so grateful for the short time I got to be her friend. I need to take some time away from here to mourn. I’ll post some updates on my brother’s apartment-fire, but I honestly don’t have the energy right now. His blog is at absolutionrevolution.com, so if you want to help, follow that site for the info.

This is my third major trauma in less than two weeks, and it’s really taking all the energy I have right now just to hold it together. If you pray, I would appreciate prayers for Kim’s family, and for the man she was married to in spirit though they didn’t have the time to make it legal. They’re about to have their first Christmas without their little girl. And believe me, she may never have even cleared 5 feet tall, but her presence was a huge one. There is a lot to miss.

Tell the people you love how much you love them. If you have bridges to mend, do it. Do it now, while you know you can. There is nothing I want to do more right at this moment, than give this girl that big hug we were saving for “after you get better.” Better never came.

I have to link to the Kat/Starbuck video I found, because emb3dding is disabled:

This one’s for you, kid. 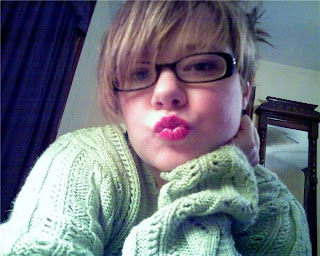 Thanks for everything. I’ll see you on the other side.