You may have seen this article floating around your social networks recently: The 10 worst people you see at every summer music festival

While I can’t take credit for the idea to write the article, I do like to think I could have done a better job at compiling this list than the creep who wrote it. After I read the list a few times, I felt short-changed on a few of the bullet points. Some are dead-on depictions of the crazy, annoying people that show up to every festival, but others are cheap shots at stereotypes or recycled thoughts with little creativity. There’s no author identified in the article, leading me to wager a guess that whoever wrote it has little festival credibility to back up their accusations. Allow me to explain which of the items on the list I agree and disagree with… and my suggested replacements for the weak ones.

Excerpt: he’s somehow found the only patch of grass with 40 open yards of interpretive dance space in every direction. It might have something to do with the fact that there’s not even any music playing right now.

These people exist. They’re fun to watch. Especially while you’re waiting in any kind of line.

Excerpt: They live to irritate everyone around them to the point of rioting, and won’t let a slow song stop them from randomly elbowing you in the back of the head.”

Sure, I guess. I don’t really recall ever seeing that many moshers at the festivals I go to but, whatever.

Excerpt: Don’t get us wrong: a loud, drug-fueled, overcrowded, clothing-optional sex-carnival of irresponsibility is a great place to bring a baby…

Hell yes to that. There are exceptions to every rule, but festivals are no place for children.

Complete description (because it’s hilarious): We can only imagine what kind of swamp-ass nightmare is festering beneath that Spandex cameltoe. Let’s get this straight: Which bygone era that you’re too young to remember are you futilely attempting to resurrect here, the ’60s or the ’80s? Because you can’t have both. You can’t have either, but you especially can’t have both.

Couldn’t have said it better myself.

Excerpt: Everything we just said goes double for this creature.

This is where the list loses its creativity. Crazy costumes may not be everyone’s “thing”, but somebody has to do it. The entertainment factor alone warrants this guy’s existence at a festival.

Excerpt: Last seen silently shaking his head at “girl in leggings,” this grizzled Woodstock veteran and possibly either the Ben or Jerry in Ben & Jerry’s is now aimlessly roaming the festival grounds, trapped in a serene but confusing fog of psychotropic drugs and dementia.

But I reckon if you just talk to the guy he really does have some good stories to share. He’s not as senile as perceived here and is probably pretty cool to hang out with.

Excerpt: Congratulations on making it “back to nature,” though we’re not sure we remember “nature” containing so many upper-middle-class white kids sliding around on their bellies to Modest Mouse songs.

File with “Fountain people” from Bonnaroo. One time at Wuhnurth we camped on an incline, to which my friend responded, “It’s okay. We’re Hill People now.”

3. This guy. Whoever he is, whatever this is, we want no part of any of it.

Again, with the costume ridicule. Lay off it, man.

2. Flashers who have no business flashing.

Excerpt: For god’s sake, lady, if you’re going to unleash those things, point them at the mosh pit kids.

This feels like a weak attempt to hurry up and get this list completed before the blogger’s deadline. This photo has been circulating the interwebz and clogging up my feeds for a few weeks now and the shock factor just isn’t there anymore. This article went stale at this bullet point. And really… I don’t think flashing is all that common at festivals.

1. Passed-out bro who sleeps through the entire festival.

Excerpt: He promised himself he’d keep it together for Dave Matthews Band, but that third Jagerbomb during the Jack Johnson set really put him over the edge.

This guy totally exists. And nobody likes him.

I now submit my suggested replacements for items 6, 3, and 2 on this list.

6. Guys(?) in unitards The drug-pusher 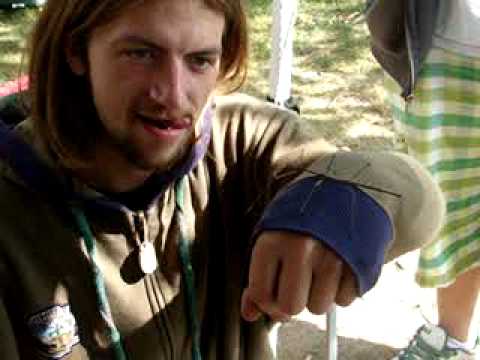 It’s a fact of festival life that you will be offered drugs from the time you set foot on your campsite (hell, sometimes while you’re still stuck in traffic waiting to park) till the moment you’re packed up and heading home. Regardless of if they have what you’re looking for (because these guys do have a place in the music festival black market), the ridiculous story-telling wooks are usually not ideal candidates for new friends to pal around with during your stay.

#3. This guy. Whoever he is, whatever this is, we want no part of any of it. The spunion.

This guy will eat too much ecstasy an hour before the Disco Biscuits set so he can haphazardly dance with flailing arms and no regard for anyone around him.

#2. Flashers who have no business flashing. Guy who still thinks it’s funny to yell for “Karl” or “buttscratcher” while walking through tent city at 4 a.m.

Much like last year’s sunscreen, these jokes should be disposed of after one year… or two years max.