It was a big weekend.
It was the kind of weekend that makes me simultaneously glad that The Munchkins are old enough to run errands all afternoon without crashing, AND makes me miss the nap-time days…
Saturday was our giant-blow out-back-to-school shopping extravaganza.
Each kid got new clothes for late summer/fall/uniforms/etc.
And a new lunch box and thermos and all the little ticky-tacky school supplies that are so much fun to buy. Correction there. Actually. You always think they’re going to be fun to buy. You remember them as being fun to buy. But in reality? Walmart and Meijer and Target turn into holy hells of aisle mazes teeming with whiny kids, frustrated parents and too many carts. At 2 in the afternoon, no one wants to budge an inch from the center of the aisle, and you end up sending your kids out secret-agent-style to fetch the pencil packs and purple rulers, letting them dodge between speeding carts and supersized adults who have long forgotten words like “please” and “excuse me”. 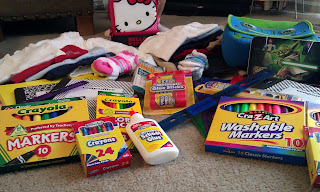 They thought it was great fun.
I thought I could hear my bank account slowing draining, like the bathtub 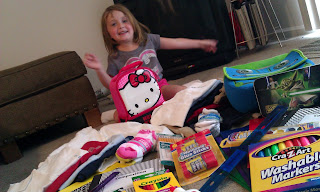 But, because they were such little troopers; enduring first a massive trip to Old Navy for clothes and then several bix-boxes for school supplies, we rounded out our trip with lunch at Steak & Shake. 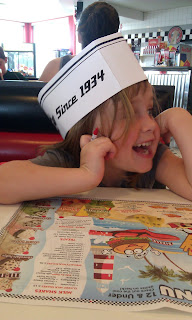 Which solidified, in my mind at least, that cheese fries & milkshakes can, in fact, make the world a better place. 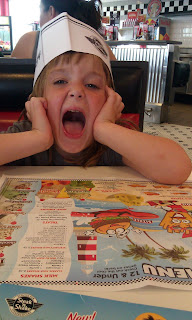 (Monkey was the ONLY one who would wear the hat with me… the other two are now officially old enough to be embarrassed that their mother wore a paper Steak & Shake hat all throughout lunch. I’m going to have SO much fun with that.)
Sunday saw us right back out in the thick of it.
We got rained out of our play date at Carmel’s West Park (which, incidentally, has an awesome sprinkler park & giant jungle gym). So we crashed Castleton Mall’s indoor play area so the kidlets could all get their wiggles out. 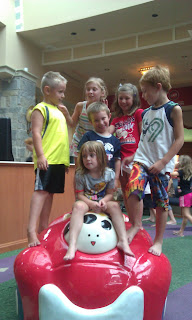 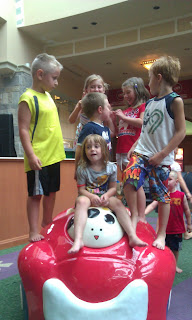 It never fails to amaze me how big Other People’s kids get. And then I realize how big My kids are getting. And then I just want another DQ Blizzard, because that line of thinking will either end in depression or the bottom of a nice bottle of Pinot g.
Regardless, it was immensely fun to catch up with everyone, and no one really had a major meltdown until it was pretty much time to go. Which, I figure, after two days of keeping them in and out of stores? Someone was bound to melt down sooner or later! 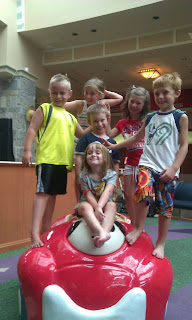 And so, Sunday night saw us making blanket nests on the living room floor, with a movie on the tube, and bowls of warm mac&cheese and carmel corn for dinner. Maybe not the most nutritious thing I’ve ever fed them, but I was being indulgent. And lazy. Mostly lazy. 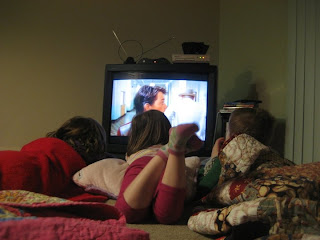 It’s one of those weekends that blew by in a blur…but there were moments that will stick.
In just the same way that I can remember so clearly picking out my first Trapper Keeper, or my Lisa Frank dolpins-jumping-out-of-the-water-over-the-moon folder.
And it’s that little bubble of a memory that makes me pause when I’m ready to pop The Munchkins little heads off for being cranky in public. I remember the most random of moments from my childhood. I don’t remember how clean the bathrooms were (sorry, Mom. I’m sure they were spotless). But I do remember riding in the station wagon singing along to Under the Boardwalk one afternoon with the windows rolled down and a blur of summer green flying by my window.
I don’t want my littles to grow up remembering that mom had a complete meltdown in the paper-aisle at WalMart (which I almost did); but rather that I took them to Steak & Shake one year, and let them order whatever they wanted off the menu, and that we got giant milkshakes and that I wore the stupid paper hat all through lunch; and that I let them pick the radio station driving home, and that we all sang some random song by the Plain White Tees at the top of our lungs until it nearly brought tears to my eyes.
I want to make random memories with them.
They’re the best kind.

You have just read a Guest Blog from Caralyn Glass
To read more from this featured member, visit their blog at Blink and You’ll Miss It
Original blog entry found at Running ourselves Ragged