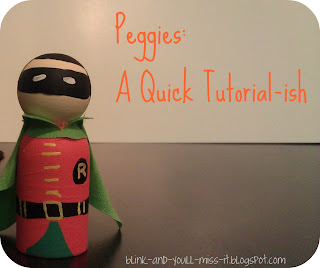 Okay. I’ve been seeing these little guys all over the place for a while now. See: here, here, and here…Awesome, right? 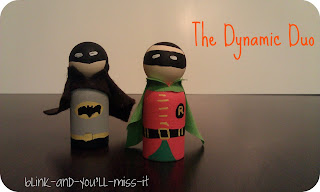 And since The Munchkins are more likely to play with the cardboard box a new toy comes in than the new toy itself, I thought these low-tech little guys would appeal to them.And they did…in a BIG WAY…I found the little wooden peg people at Hobby Lobby for a whopping $2.99. And I had a handful of acrylics just lying about the place already. Throw in a couple of new paint pens for detailing (because they were on sale, kiddies!) and some cheapie paintbrushes I yanked from The Monkey’s watercolors and I was set to go… 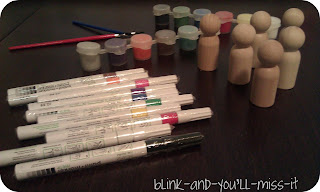 I started off laying down a “face” base of skin tone paint. 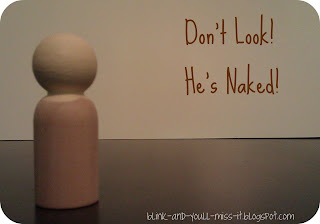 From there I did hair, then body color.
Acrylics tend to dry pretty quickly, and the wood just soaks it right up. Two coats minimum on everything worked well to my tastes. Harken back to kindergarten art classes, gang. Paint your light colors first…then dark…then the details last. 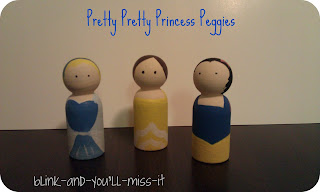 I used the paint pens for detailing. And mostly I just screwed around with them while watching Lover Boy on dvd (because 80s movies are, let’s be honest here, essentially 85% of my movie collection. Who wants extra anchovies?!!) 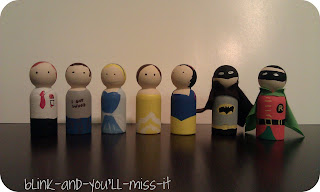 So there you are, a Tutorial-ish for something that does not require one.
Also, here’s my favorite from last night.
…Because I think I’m hilarious… 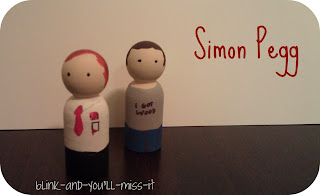 You have just read a Guest Blog from Caralyn Glass
To read more from this featured member, visit their blog at Blink and You’ll Miss It
Original blog entry found at Peggies: A Tutorial. Sort of.