Local trio Max Allen Band (MAB) has been honored with the title of Indy’s “Best Blues Band” for a second year in a row. But before they take the stage at this year’s quickly approaching MojoStock, they wanted to set the record straight that their sound “ain’t your grand daddy’s blues.”

The complex cast of three includes Max Allen (guitar and lead vocals), Shaan France (drums), and Dace Robie (bass). In addition to playing some blues, MAB is known for fusing several sounds like funk, rock, jazz, and reggae, to name a few. Their shows are an entertaining mix of serious music blended with a laid back, euphoric vibe. 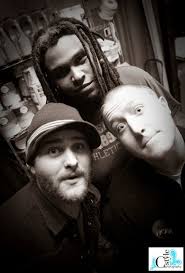 When asked how it felt to be making their first appearance on the MojoSotck line-up, the simple word “finally” was instinctually said before the guys took turns elaborating their excitement on being in on the fun.

Dace: “We’re really happy to get involved with the Mojo scene. I think there’s a lot of good artists and live bands that are going to be playing there, and we’re glad to gradually get affiliated with other acts. We still play roots stuff and we still play blues, but we like to incorporate more than that. And we don’t want fans of electronic music to shy away from us just because they read that we are this roots rock.”

Shaan: “It’s more or less looking forward to putting on a good show and being involved in the same type of event with a lot of our friends. Also, it’s great for us ‘cause it allows for a lot more people to say, ‘Hey, well these guys are from here,’ and, ‘Hey, these guys aren’t just a blues band.”

Max: “That’s the one thing about going and traveling, and doing shows is that you don’t get to see a lot of shows. It’s cool whenever you get to play a festival atmosphere because you get to play, and you get to watch other bands.”

Discussing the two stages at MojoStock (the jam stage and the electronic stage), along with the recent purchase of a guitar synthesizer by Max, revealed the group’s collective interest in building their sound by working with djs and other electronic artists. They feel MojoStock holds a lot of possibilities to not just showcase the complexity of music they always play, but also how they are working to evolve it.

Dace: “I think there’s a dialogue going on, and it’s all just about the music. A lot of djs learn from bands as far as trying to get more and more live performance into their show. Then we as a band try to aspire to the continuity that an electronic artist has, especially transitions which are really smooth. The more mixing and matching we’re all doing together, the better it’s going to be for everybody.”

Shaan: “What I really like about this band is that we’ll play anything and we play everything. So you don’t get stagnant in one genre. Being a musician, and wanting to be creative, and wanting to be around creativity, it’s a good place to be. I think my goal would be to do MojoStock again. Play the jamband stage, then go over and play the electric stage.”

Elaborating on this thought, the three talked about one influence of their’s, Jojo Mayer. Shaan, having first mentioned him, played a quick clip of a song by Mayer’s group Nerve. As the song played some dubstep beats, Shaan and Dace began enthusiastically bouncing up and down in their seats.

Dace: “Jojo Mayer is one of the top notch drum set players of all time. He plays all the percussion live, and really recreates what the computers do. Uncannily, it takes a lot of technical ability to do all of it, but, he plays the shit out of the drums. Any really good drummer these days, pretty much 9 times out of 10, are gonna know how to emulate what the djs do in a jungle beat, or a break beat, and they’re the ones who influence us a lot.”

In addition to Mayer and multiple, multiple other musical influences that affect their sound, Max credits life’s journeys as his lyrical muse.

Max: “Anything that gives really intense emotions, and totally distracts from everything else in life, I think that’s where I find my best work. When I’m either completely pissed, or completely infatuated with something, that’s when I’m like I’ve gotta put that down on paper and do something with it.”

Doing something is exactly what Max has been up to since he began playing professionally at 16-years-old. The gradual development from a simple sound and body of music to a more complex form is nothing new. Change and growth have been continuous. Not just with the music, but with the members as well.

Being the first current member to join the group, Shaan started off by filling in gigs a little while after graduating from Morehead State University. A few months later the fill-in position became permanent when Max’s problems with his previous drummer became unreconcilable.

Shaan: “I thought it was a really cool group, and I liked the fact that it was a 3 piece. There’s just a lot of leg room, you know, but in that same sense, being a 3 piece you’ve gotta work really, really tight. There’s nothing to hide behind. There’s drums, bass, guitar.

And for me being the oldest of the group, I like that it allows me to learns things from these guys that I never got to learn while I was in college. Things that just weren’t in at the time, or that just weren’t a point of focus. I started listening to music that I never, ever would have listened to if it wasn’t for Dace and Max.”

Dace’s entrance into the band happened a little while later when his father (who was a friend of Max’s) suggested the band to Dace, and Dace to Max.

Dace: “Yeah, my dad came home and was like, ‘There’s this really cool band.’ And I was like, ‘Well, there’s a lot of really cool bands.’ But eventually we got together, and…(said in a sarcastically, dreamy voice) it’s been magic ever since.”

Over the past couple of years, the group has focused a lot of their time booking shows out of state and traveling. Their hope was to remain fresh while discouraging locals to continually put off attending readily available shows. However, there are times they feel doing so may have worked against them.

Shaan: “The thing about our band is we’ve been here for a while. A lot of people will come up to us and ask us where we’re from because we spent so much time earlier on playing and trying to gain popularity around out of state.”

Max: “Well if you go out of town, the demand for you at home will go up. But it goes the other way if you go out too much, a lot people forget about you.”

It seems obvious with the crowning of Indy’s “Best Blues Band,” that being forgotten is definitely not the case. If you have forgotten, however, or you don’t know their name, you can catch them live at MojoStock coming up in less than two weeks. They are set to play the jam stage on Friday, July 29th from 12:00 a.m. to 1:30 p.m. In addition to playing the festival, they are working on a new album which they hope to have out by the end of the summer.

Can’t wait until then? More information about MAB can be found on their website: http://www.maxallenmusic.com