A successful weekend of camping at any music festival requires a fair amount of planning on the front end. Read on for my advice as you begin to ponder how to stock your cooler for Mojostock 2013. When I asked my facebook and twitter networks what they enjoy drinking the most at music festivals, an over-whelming favoritism to water was not what I expected. It’s okay though, because that means my friends are smart! The number one key to comfortable, controllable drinking at a festival is to hydrate.

For two nights at Mojostock, I suggest bringing at least one gallon of water per person. If you have room for it, bring two per person. Water doesn’t spoil (duh) so you’ll eventually use it, if not at the festival. Buy the gallon jugs, too, instead of those silly cases of 20 ounce bottles.

Get yourself a spill-proof water bottle and two gallons of drinking water and you’re good to go on keeping your body regulated.

With the water situation under control, it’s time to mix in the alcohol. I’ve never been a huge fan of bringing beer to a festival for many reasons:

However, one of my favorite festival memories ever is cracking open an ice cold can of Sun King’s Sunlight Cream Ale while waiting in line somewhere on the way to the top of Marvin’s Mountaintop in West Virginia. After that first long journey to All Good Festival, it was satisfying to have a refreshing taste of home while being so far from Indianapolis.

Beer can be a nice accent to mixed drinks. It’s also a good way to ease into your day drinking. Don’t tell me you’ve never had a breakfast beer before?

I’d also suggest trying the new golden ale from Upland- Campside (4th row down, 2nd over). It’s described as “the perfect warm weather beverage for those who think flavor is just as important as refreshment.” Recommended for any beer snob who agrees it’s a good idea just to always have a sixer around in case you get a carving for some hops. The ingredients here are simple, but precise. Pinnacle Cotton Candy Vodka is widely distributed, so you can get it almost anywhere. Any grocery store will have White Cran-Strawberry juice, as well. The juice is sweeter than regular cranberry but still tart, so it counters the sugary flavor of the vodka perfectly. It sits lightly on a stomach and is an all-day-sipper kind of drink.

Almost as sweet as the Pink Unicorn, except this guy is slightly bitter rather than tart. The Sweet Tea Vodka beverage does double duty if mixed with water, keeping you hydrated while maintaining a buzz.

For my next trick, I’ll teach you how to make a margarita without the heavy, sugary taste of a mix. You’ll need all of the following for two pitchers (trust me- you’ll want to make two pitchers): 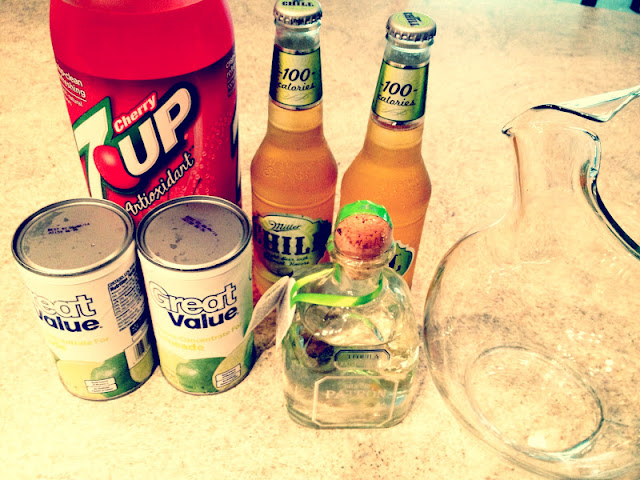 You’ll make one pitcher at a time.

Warning: these can be quite deceptive! Make sure you’ve ate well and hydrated before you mix these up. They go down easy and they’ll be gone quickly. Just remember that when the two pitchers are gone, so will be the entire bottle of tequila!

I learned how to make an Emergen-C Mimosa when I interviewed Cherub in March after an intimate set at the WuWu Fest as part of SXSW in Austin. It’s mimosas without orange juice- conveniently perfect for camping. Simply add Emergen-C to a bottle of champagne. “It keeps you healthy,” says Cherub’s Jason Huber. If you plan to mix this up at Mojostock, consider looking for champagne in plastic bottles; it’s never a good idea to bring glass bottles into a festival.

I’ll end this festival drink round up with recommendations from Mojostock veteran Laura Ramsey and Max Allen of The Max Allen Band:

“Jello shots are very easy. 1 cup super hot water, add jello and stir until dissolved completely. Then add 1 cup vodka of choice and stir. Get shot cups and tops at party city. Then stick em in the fridge! You can add more water and less vodka if you like!”

“Whisky and coke, red bull and vodka, vodka soda water/lemon, coors light, and if its present moon shine is great to have. Crunk away!”