Wednesday June 13, heavygun kicks off a series called THAT NUNU in the new upper room above Za Pizza. Heavygun has always been known for supplying something different to its followers. The first instalment will include heavygun resident dj TXTBOOK, YO! AYY.TEE., JESSIE & AMY, and TONY STYXX. Fountain Square Brewery will be tapping. $10 pitchers. $4 u call its. $10 large pepperoni pizzas. Come out and make this event something special.

When Yo! Ayy.TEE., who’s real name is Anthony West, says Party Forever, he means exactly that. When he’s telling you “I’m Dope Bitch”, he’s not saying it to be cocky, he’s just simply stating why he’s able to do everything he does and says. He considers his self to be a future pioneer to the music world and will stop at nothing until his goals are reached. Yo! Ayy.TEE. is the perfect blend of raw human emotion, sound, and energy. He’s been there, done that, and want’s to take you there through his music.

The music of Jessie and Amy is raw, acoustic, and soulful. It is full of energy and emotion. The creativity of their music is displayed by their variety of sounds, styles, percussion, and harmonies. 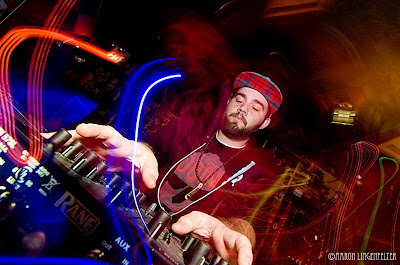 Hailing from the outskirts of small town Terre Haute, Indiana comes a DJ with skill, and much much more. Known as TXTBOOK he grew up with an interest in music unsurpassed by anything else. Receiving his first set of turntables at 12 years old, while most of his peers were playing games he was already hard at work and lining up gigs. Since that time he has immersed himself in a plethora of different genres of music. Hip-Hop being first and foremost, but being well rounded with a background in Electronica, Dub, Indie Rock and Hardcore music which has given him a unique influence and presence on the stage. TXTBOOK works the crowd like no other and he LIVES to make them dance!

Tony Styxx, an Indianapolis native, is a Spoken Word Artist/MC/Human Beat box. An entertainer since age 18, Tony Styxx has taken his time to cultivate his talents in the Indiana soil opening doors for him to share his gifts all throughout the Midwest.

Back in the Summer of 2011, we got the crazy idea to startup a brewery, not because we wanted to be on the bandwagon, but because we wanted something different, something our talents and passion for beer could make happen. Out technical background in Microbiology, Chemistry, and Automation, made up the perfect storm needed to produce quality beer with a higher level of consistency and with improved shelf stability. Our passion for beer and diversity of tastes allowed us to craft carefully refined recipes that we know will delight you.We chose Fountain Square because of the community. Since we will be the first to admit our creativity and talents exist on a side of the brain that has little capability to draw, we have this admiration and attraction to those whose talents reside in the arts. We have connected to this community over the past year and look forward to being a vehicle for expressing its artistic nature. Fountain Square is a community of hard working, creative, fun loving, and genuine people. They are probably the most helpful people we’ve ever met. We are truly honored to be a part of the community and will strive to be worthy ambassadors and stewards.

We’re home to the biggest slice in Broad Ripple. We wanted to shake things up a bit – but also capture the New York / Itallian style pizzeria and eatery – with the flavor and flare of quality and customer service in a unique great atmosphere.

The Upper Room is just that! A place where people can come, enjoy each other’s company and conversation, while enjoying great New York Italian cuisine and, of course, the BEST view of Broad Ripple!

The move to take over the upstairs is directly inline with the vision of ZA. Not just a lately night stop for a quick slice, although the downstairs is perfect for that, but a move into an actual dining experience. The culture the Upper Room should be an equal mixture of all types of people from all different backgrounds, bonded together by great food and a great atmosphere.

It will take time to spread the word and change the perception of ZA, but we are confident that visiting the Upper Room will create quite a buzz. Don’t take our word for it! Come in, take a seat, enjoy your meal, some beer or wine, and decide for yourself!

Like us on FaceBook and follow us on Twitter, because we’re pushing out great specials and events that will be too good to pass up! We stand by our tagline, “Enjoy a slice of goodness!”