“Bloodline” is a documentary from the Cinema Libre Studio directed by Bruce Burgess that explores the popular belief that Jesus married Mary Magdalene and fled to France with their child by following clues left in churches. It sounds very “DaVinci Code” and according to IMDB was released in 2008, 2 years after the “DaVinci Code” movie, more than likely in response to the peak of interest in the subject raised by the book/movie.

Bruce Burgess right away comes clean that the interest in the book is what propelled him to investigate the claims. He goes straight to the Louvre within the first few minutes and talks about the hidden messages in paintings and literature. The footage in the film has been taken from 2005 to 2006.

Burgess speaks with a spokesman for the Priory of Sion that became a public organization in 1956 but could not give away all the answers. This man indicated that certain works of arts are coded to allow a journey to the truth but it is too dangerous to say outright on film. Another mysterious guy in a cafe walks up and hands the spokesman a card with writing on it after which he shut up. Is the Priory real or a hoax? If it were a hoax, it is unlike any other hoax in history making the documents and “proof” so difficult to come across hiding the materials in libraries and churches. By releasing information gradually over a great deal of time, it is a lot more likely to eventually become widely accepted.

Tim Wallace-Murphy, an author on cracking codes speaks about Latin and anagrams and solving puzzles. He speaks of it as a game but asks the question, who is playing it? The claim is that Jesus did not come to die on the cross for the peoples’ sins but to guide others to a path of a way of living and spirituality which would be a different version that would undermine the church’s message for years. If a bloodline could be proved and came to light, many changes would take place. Some people the author met claiming to be from the bloodline were descended from Jersuleum, but it is unclear if they are direct from Jesus. 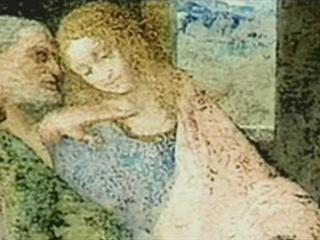 Burgess does a lot of investigating into his subject’s backgrounds for authenticity and some people refuse to go on camera and are instead audio recorded. He tracks down a Nicolas Haywood who claims not to be a Priory of Sion member though others are convinced that he is. Haywood does agree to go under the lights on camera and agrees for the record that there is a bloodline and there is evidence for it, but the series of items that prove the bloodline are kept together in secret that he will not divulge. He puts on an aura as the cigarette smoking man like in “The X-Files” and seems much more mysterious with the smoke whirling around.

Suddenly Burgess’ phones are apparently being bugged and he gets more involved in the story and it is hinted Burgess himself might be in danger too as well as people he is bringing into it. Haywood indicates that men who talk too much get poisoned, labeled as a cerebral hemorrhage including one person who dies before they can interview him. This is just the beginning!

The drama makes it very exciting with more at stake and might make you feel like you are living the DaVinci Code story all over again but you have to ask how much of it is contrived and how much is real. It is presented in an amazing way with discoveries supposedly being made live on camera, but from another perspective it all potentially could have been planted. There wasn’t anything in the film that it wasn’t possible in manufacturing circumstances, but then again it could all be real depending on how much you want to buy into it. The filmmaker obviously comes to a point of belief and continues to relate it in commentary. Whether you believe is completely up to you, but it’s an interesting ride to say the least either way.

First off, the trailer for “The Beautiful Truth” that automatically played to get to the main menu caught my attention right away because it was so off topic of this piece and plays on a common fear people have about their teeth and claims to expose the greatest mercury poisoning one could have might be from fillings in their mouth and ominously asks “How many fillings do you have?”

For bonus features, there is an extended interview with Nicolas Haywood without being cut up like in the film. Absent of the music, it’s a little less spooky but more informative and realistic. The deleted scenes are in low resolution video with the website address etched across the center and show footage of taking the chest to a museum, coded messages in a church, exploring a quarry and underground labyrinth, and more tomb footage.

Director Bruce Burgess and Producer Rene Barnett have a commentary track for the film. After starting off talking about his red watch strap and the difficulties of looking pensive in the car while his cameraman attempted not to fall over, he admits that Haywood is the Bloodline version of Cancer Man from X-Files. They remark on how exciting some of their findings were and how some people were mysterious and withholding in their giving of information. Also the many warnings that Rene gave by phone are acknowledged but not explained. Many facts are just acknowledged but not expanded very much on.

More fascinating are the images of scientific documents examining hair found at the tomb and the fact that they aren’t afraid to put them on the DVD. If you get the chance, check out this movie’s website. It has a really neat opening graphic and is very detailed with more information about the film including news, a blog, and a photo gallery.
http://www.bloodline-themovie.com/