Michael Haneke, director of Cache, now brings us an equally disturbing, tension-filled story told entirely in beautiful black and white cinematography, “The White Ribbon.” Taking place in pre-WWI in a small Protestant German village, religion and fear take their toll on the villagers as mysterious events and “accidents” take place around their peaceful town. The mystery of who might be behind it grows stronger every day and perplexes everyone. The most disturbing part is the fact that it seems children might be the source of the evil. I will be giving a bit more synopsis than I normally would, but I think it’s important to properly understand the story.

I saw Shutter Island two days ago and now this. I’ll never be settled again it seems! This is not a film for the average movie-goer because it moves slowly, it’s quiet, there are subtitles, it’s not in color, it’s cranked full of symbolism, and let’s not forget it’s two and a half hours long. However, if you are a film buff and like artsy stuff as well, this is your cup of tea.

I really enjoyed Haneke’s strong build of suspense throughout the film. For an R-rated film, there is not a lot of on screen violence. Taking place off screen, you are left to imagine the consequences most of the time and that can be scarier still. Walking around slowly in this old creaky houses waiting for something to happen will keep you alert and interested and the time passes by quicker than you’d think. 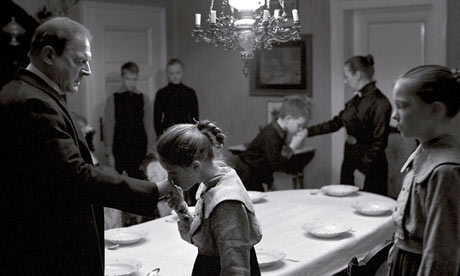 This is a strong patriarchal culture. Father sets down the rules and the punishments for even the smallest of misbehavior and the degree of intensity and psychological damage being inflicted doesn’t leave a lot of room for surprise that this could have been part of the generation of children who grew up to be Nazis. The children test their boundaries to see what they can get away with and the more they get away with, the easier greater crimes seem to be. Not that the adults are any better! The adults’ infractions and bad qualities are laid out for the audience and all members of this society are concerned with proper punishment above all else.

The actual “white ribbon” is a punishment itself to be worn by the pastor’s children after they act up. The white color is to remind them of the innocence and purity they should be seeking in their everyday lives and they have to wear them for the world to see.

The story is presented to us over a long period of time by a narrator who is schoolteacher to the children. His subplot also lends the film its only beacon of shining light as he falls in love with a nanny and attempts to woo her.

The children in this film seem mature beyond their years, even the youngest ones. They handle the heavy themes with faces of innocence that conceal the malice that might lay behind them.

This film had the best/worst break-up scene ever. This man laid out the most derogatory base insults upon this woman in such a matter-of-fact matter and it was so utterly raw and scathing, it made my jaw drop.

This is the best foreign language film I’ve seen in a long time and one of the best movies I’ve seen this year so far (even though it was released in 2009, it is only just now coming to theaters in my area). It has already won some awards and is up for Best Foreign Language Picture for the Oscars. Not for everyone, but a good hearty meal of a film to the right audience.