That’s right, we’re going old school, baby! I had never seen this before and my husband used to watch it on Betamax so let’s go!

Before you see the newly updated version with fancy CGI, I highly recommend taking a look back to 1981’s “Clash of the Titans” directed by Desmond Davis. Looking at it today for the first time, the special effects do seem pretty silly in places, but if you think about it from the perspective of its first audiences, this was probably OFF THE CHAIN! (though no one used that expression either) In an ancient world of petty jealous feuding gods, Perseus (Harry Hamlin) is the son of Zeus (Laurence Olivier) and is put through many trials and tests to ultimately win his bride, the beautiful Andromeda (Judi Bowker).

The gods are so deliciously childish and vengeful, it’s like watching a soap opera. Laurence Olivier uses all stiffness of his stature to go monarch on everyone else. Hera is played by Claire Bloom and Aphrodite is played by Ursula Andress whom you might remember as the first Bond girl. Poseidon is played by Jack Gwillim whose special effect of being able to breathe underwater for long periods of time is pretty funny. 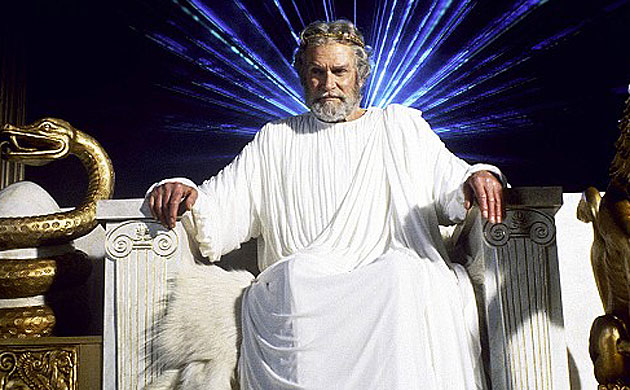 My favorite god (or goddess rather) would be Thetis played by none other than Maggie Smith. I was so excited to see her younger looking face onscreen! She is usually known these days for playing older women roles like Mother Superior in “Sister Act” and Professor McGonagall in the “Harry Potter” franchise due to the unique tone of her voice and sweet older appearance. Her giant watery eyes lend so much emotion to everything she does, even when being an immature vengeful god! I think my favorite special effect in this movie is when her tribute statue falls apart after the queen makes an offhand remark about her beauty and her statue head’s eyes open and she issues threats to the people. It doesn’t match up perfectly, but wow, I could see how cool that must have been to see in ’81!

Perseus is a mop-top of a strong youth with a killer island boy tan and serves as the brunt force of the film. He fights, slices, dices, and manages to also occasionally outwit his foes and move quietly and gracefully around Medusa until ready to strike. Most of the time, the other characters have to tell him what to do and the gods cheat by sending him weapons and a golden owl that would annoy Harry Potter’s Hedwig. Andromeda is beautiful in that Princess Buttercup/Robin Wright sort of way that just defies today’s standards and brings us back to a simpler time of ringlet curls and sparkle and innocence. What I enjoyed about her character is that she attempts to fight her own battles as well by trying to accompany Perseus on his missions. The others look a little annoyed at her tagging along but I thought it showed guts to take that stubbornness and want to try and be useful in thwarting her demise. She is graceful, dutiful, and looks great in a very sparkly sacrificial dress.

This is a great 80s adventure movie for sure. There are lots of giant creatures like scorpions and crows, a flying horse we all know as Pegasus, a gadgety owl, the giant seamonster Kraken, and the favorite, the slithery glowing eyed Medusa in all her stop-motion glory. It’s a lot of fun, the pace moves well for the time. I expect the new updated version to be edited so tightly in the action sequences that we’ll all get practically dizzy, especially if in a 3D showing. I am very much looking forward to the new version with Sam Worthington and Liam Neeson. Unleash the Kraken!!