On Thursday April 8, as many of you already know, the Dubstep Hippies are Attacking the Vogue.

Bassnectar, who seems to be everywhere these days, appears to have transcended multiple genres and groups from the EDM crowd, top 40, and somehow – the hippies.

To celebrate his return to Indiana, and inaugural trip to Indianapolis, the good folks of Juxtapoze, G-9 Collective, and Indymojo.com have put together a special treat for the masses.

When the Vogue empties out between midnight and 1AM, and everyone is still feeling the bass reverb in their chests, an up and coming and newly-signed Dubstep Producer from Memphis, will be waiting for them with open arms a mere 2 blocks away.

Cyberoptix aka Alex, who has been courted by DNB/Dubstep Mistress Reid Speed’s relatively newer label Play Me Records, makes the journey from Memphis, TN to grace our presence and bring some heat to The Red Room in Broad Ripple to help usher in the Spring Concert Season.

With new productions coming out almost weekly, Cyberoptix plans to bring a lot of original and remixed material that has yet to be heard by anyone out there.

In fact, with just over a week from the gig, Alex is finishing up a dubstep remix of the interweb’s viral hit – Enter the Ninja – by Die Antwoord

If you’re going to Bassnectar or just looking for something to do on a Thursday Night that is fresh, innovative, and outside the realm of that box in which you typically reside, swing through the Red Room and GET DOWN with Cyberoptix and crew. 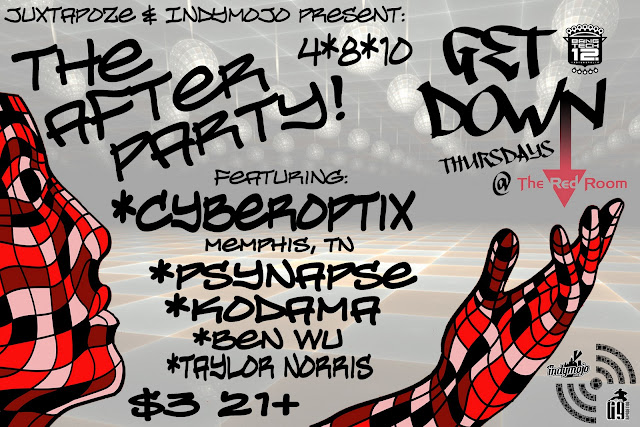