Something I have recently learned since attending shows at Radio Radio; never make an appearance at the time they list on the bill. Unless you plan on starting off with a dozen discounted shots or tackling a few yummy Sun King brews; it’s easily an hour or more wait time.

So here I am waiting through a lag-ridden sound check, with no one to blame but myself. Canada’s Hollerado were staggering around the stage, looking lost and anxious. Even when they were finally mounted to their instruments, their blatant lack of confidence was distracting. Lead singer Menno Versteeg made a questionable plea to a mostly indifferent crowd, “We got a lot of space up here in the front, so come join us! Um…if you want…your call.” A few oblige this request but mostly is left with eye rolls. This awkwardness completely dissipates when they thrash into the catchy yet sarcastic “Do The Doot Da Doot Do”. On immediate reaction, gave a Finger Eleven “Paralyzer” vibe only with a power pop presence. Bassist Dean Baxter supplied funky bass line after another on songs like “Americanarama” and “Riverside”. As if their repetitive choruses and hooks weren’t enough, Hollerado themselves were the true showcases of their set. Finally, the nerves are settled and the true personalities shined. As true Canadians, they joked about hockey coaches, Canada’s version of colorful language among other randomness. Some band’s in-between song banter can be provoking at times but these guys had the crowd entertained and giggling throughout. Hollerado, whether performing or simply being social, had a fun and infectious energy about them that couldn’t be ignored.

The crowd liked them enough to demand an encore. Their enthusiasm must have traveled backstage, as the lead guitarist (Geoff Bucknam) and drummer (Nick Shuminsky) for Free Energy joined them on stage for an impromptu jam session to close out the set.

Free Energy wasted little time after Hollerado before they broke into their breakthrough single, appropriately named “Free Energy”. It was initially hard to transition the flamboyant antics of Hollerado but this was replaced with a knowledge and fondness of the band’s more popular material. It took no time for the floor to be packed. With a band that has very recently rose to its fame, they had an overly relaxed ‘been there, done that’ stage presence with lead singer Paul Sprangers leading the charge. Free Energy was destined for radio with songs like “All I Know” that has floating hooks that conjure up memories.

They played a new song off an upcoming album that could easily be mistaken for a tame Andrew W.K. minus the terrible voice renditions of Andrew W.K. himself. I was conflicted on “Bang Pop”. Even live with Lynyrd Skynyrd guitar styling, the song seems campy and hard to take seriously. Only problem is, as much as I hated myself for it, I still found myself gleefully bobbing my head back and forth. Luckily, all four members of Hollerado jumped on stage to distract me from my internal struggle. A spark was lit under Free Energy as they fanatically jumped up and down with Hollerado throughout the song’s climax. I found it pleasingly ironic that a band called Free Energy was proactively borrowing energy from another band entirely. 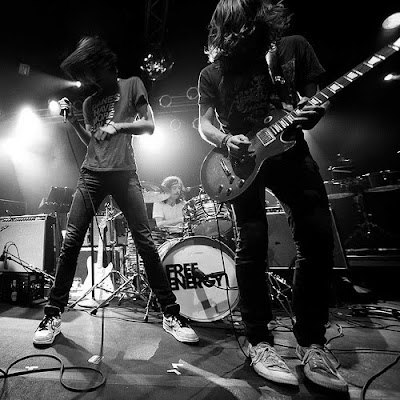 It was a brisk set from Free Energy. Without Hollerado, I’m sure I would have left disappointed with just an album’s worth of material to assemble. I’m sure with future albums and more road experience, both Hollerado and Free Energy will only grow from these experiences. When those times come, I’m afraid more than likely the price of admission will change and they won’t be at the approachable Radio Radio. Let’s just hope that’s all that changes with these guys.