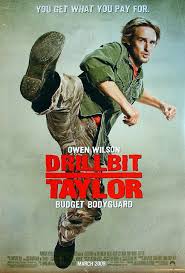 “Ryan, Wade and Emmit attend their first day at high school and they’re pumped… until they meet up with Filkins, a school bully who comes off like a little Hannibal Lecter. Before they become completely engulfed in Filkins’ reign of terror, they seek out some protection by placing an ad in Soldier of Fortune magazine. Their best response – and the cheapest – comes from Drillbit Taylor, a down-on-his luck soldier of fortune who lives a homeless – he likes to say “home-free” – existence on the beach. He enrolls them in some physical and mental training.”

This was just released on DVD last Tuesday (7/1/08), so I picked it up to watch it, not much else came out that I had REALLY wanted to see so I figured I’d give it a shot. Wasn’t impressed. It’s an ok movie, if you have nothing better to do on a lazy day. I’m sure I could have found something better to do today, but hell I gave this movie a shot.

The plot was ok, I mean I was picked on a bit in middle school, but didn’t catch any flak in highschool so I could only relate a bit to this movie. About the only thing going for me was I wanted to see the bully’s ass get kicked. As far as the comedy aspect goes, eh, it was ok, a couple of parts were funny, but nothing that actually made me laugh out loud or even chuckle a bit, just slightly entertaining.

The acting was probably, I’d have to say, the best part. There wasn’t any break through performances by any of the newer child actors, but I’ve definitely seen worse in other movies. On the other hand, Owen Wilson has dropped off a bit, in my opinion, in the acting world.

The action in the movie was ok, I mean it’s more of a comedy than action but the funniest part was when the kids were preparing for a fight, I’ll leave it at that.

Overall I’ll drop this review about 1 1/2 martini glasses, there were several points in the movie where I had lost a bit of interest and was waiting for the next moment to arrive when it would grab my attention. But would only recommend this movie if you have nothing better to do OR if you’re looking for a good date movie where you don’t plan on actually watching the movie haha.

Until next time mofo’s……