So I think there’s a national championship game tonight/today/yesterday, depending on what time you read this. It could have easily gone over your head because no one is really talking about it. – Sarcasm

The Butler Bulldogs are playing in it for the second year in a row. Only this time they should be the odds on favorite to win.

Last season, Butler was the lovable upstart trying to win a national championship for the little guy. But with the eighth-seeded Bulldogs back in the national championship game for a second straight year, this time against third-seeded Connecticut, college basketball doesn’t think they’re quite so cuddly anymore.

Forget Butler’s mid-major label because when the final buzzer sounds, they’ll have a new one: National Champions.

Here are five reasons Butler will be cutting down the nets:

1. Brad Stevens: The Bulldogs’ unflappable, brainy coach is simply a genius. Yes, he’s only 34 years old, but forget about his age. It doesn’t matter when a coach has the uncanny ability to make all the right moves like Stevens does to keep his team in big games. He’s sure to have an interesting defensive plan to slow Connecticut’s one-man team, guard Kemba Walker, and once again make the in-game adjustments necessary to outfox Huskies veteran, 68 yr old fossil, Jim Calhoun.

2. Shelvin Mack: Butler’s junior point guard isn’t nearly as touted as Walker, but he can be just as lethal in stretches. He demonstrated that again Saturday night in the Bulldogs’ national semifinal victory against Virginia Commonwealth by reeling off 10 straight points in the second half to break open the game. He’s averaging a solid 16 points, 4 rebounds and 4 assists per game, but those statistics don’t fully depict his impact. Just know this: When his team needs a clutch play, Mack will make it. He is an NBA player for sure.

3. Three-point shooting: Statistically, Butler isn’t that much better than Connecticut when it comes to 3-pointers. The Bulldogs are making 35% of their attempts, while the Huskies are at 33%. Butler, however, is a lot less likely to brick 1-of-12 from 3-point range, as Connecticut did in its semifinal win against Kentucky on Saturday night. Senior guard Zach Hahn, the Bulldogs’ X-factor on 3s, is primed after snapping a shooting funk with a pair of HUGE 3-pointers against VCU. 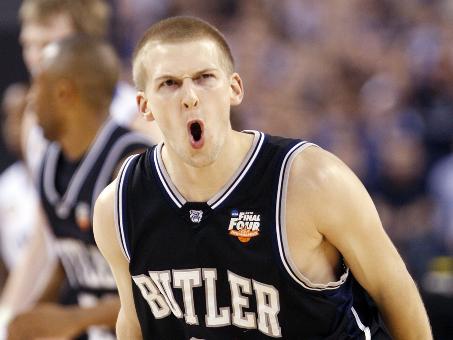 4. Matt Howard: Like Mack, the crafty 6-foot-8 Connersville Spartan, senior power forward is another overlooked star of college basketball. He leads the Bulldogs in scoring (16 points per game) and rebounding (8 per game) and, most important, isn’t as foul prone as he was last season. He can score inside and has a knack for making hustle plays, but his 3-point shooting will be a problem for Connecticut’s big men. He missed all five of his 3-point shots against VCU but is making 41% of them this season.

5. Experience: The bright lights of the national championship game didn’t faze Butler last year in its near upset of Duke and won’t tonight. But the Bulldogs’ familiarity with the stage is a definite advantage. Last year, they entered the title game with pressure on them. This time, the pressure is squarely on Connecticut, which knows that most of the country is rooting for it to lose. Experience is sometimes viewed as overrated, but Butler’s poise will shine when it matters most.

Looking at it from Butler’s standpoint, matching up with Uconn over Kentucky is definitely what Bulldogs fans wanted. The sting from watching Duke celebrate last year will be the difference tonight. Brad Stevens sharpen your scissors and get the ladder out. The 2011 National Champions will be the Butler Bulldogs. Butler-61 Uconn-58

Butler is going to win the National Championship…I can’t believe I just wrote that.