Rather than just write about one of the games in the series, I just got through playing through all three games so I figured I would just go ahead and write about all three.

Well, definitely have to say that I certainly love the series and it certainly gets better each game you play through. Ubisoft really improved gameplay as they went through each game. 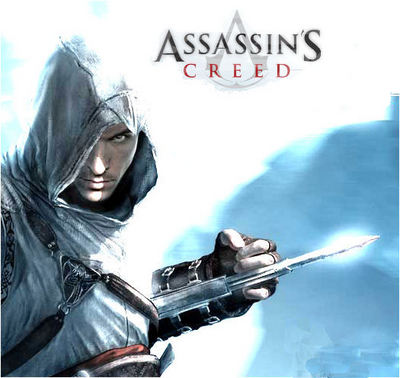 Assassin’s Creed was good, I enjoyed the story line and it was exceedingly fun using the different methods of assassinating people. Ok, now wait, I know what you’re thinking if you’re not into this sort of thing, “really? you’re pretty twisted if you think killing people is fun”. First, yes I am twisted. Second, you’re a good assassin and do it for a greater cause. Essentially the story that spans all three games is that you’re Desmond Miles, ex bartender that was captured by Abstergo (Latin for “cleanse”, this comes into play later.) Apparently it’s believed that you carry your ancestors memories in your DNA and you can access them by linking up with a machine called an Animus. Abstergo is actually a front for a more historically well known Templar Knights (you may have heard of them from history, or from Davinci Code/Angels and Demons starring Tom Hanks). Essentially it’s the Templar (the bad guys) vs the Assassin’s (the good guys). In AC1 you access the memories of your ancestor Altair (al-tay-ear), you belong to a large group of other assassin’s and you’re trying to obtain this treasure that is sought after by the Templar Knights. You’re assigned to assassinate key people. What I like about this series…is that, while it is a fiction game, it has some of it based on actual history and big names in history (i.e. some of your equipment used in AC2 and brotherhood are created by Leonardo DaVinci). Gameplay is rather shaky and the AI is completely moronic on occasion, however if you can make it through those two things, it’s an awesome game with awesome story.

Assassin’s Creed II, definitely got better with this one, you’re still Desmond Miles and you find out more about what is going on with this Abstergo company, that apparently they are wanting to use the artifact from the first game to take over the world, but “for the good of man”. Essentially by any means necessary they are going to save mankind from destroying ourselves, even if that result is from mind control. Essentially the Jesuit principle that the “end justifies the means”. Instead of playing as Altair in this series you play as an Italian, Ezio Aldatore de Firinze. While attempting to seek out revenge for the deaths of your father and two brothers you stumble upon this plot involving the Templars. Gameplay and AI greatly increased in AC2. As well as the different methods of “assassinating” your foes. One of my favorites is taking on a soldier barehanded, disarming him and then killing him with his own weapon. Got such a kick out of it. In this game, outside of the Animus, you learn more about Subject 16 (Desmond is known as Subject 17), who apparently went crazy and “hacked” the animus leaving clues about something pretty important (some hidden side missions). The environments are free roam and you essentially do Par Kour through the cities, climbing buildings and such to get around. Definitely a must play.

You continue on with the memories of Ezio and is really more so a continuation of AC2’s story. Not much more to really report on the storyline. Gameplay got better with this one too, not really anymore new ways to assassinate people, however my favorite way to dispatch people in AC2 was enhanced. Disarming people, now certain weapons you can take from others you can throw. Scenario being that you’re fighting a couple soldiers, you disarm one, kill him with his own weapon, then the other soldier gets scared and starts to run off…well why not throw your big ass battle ax at him that you just took from his buddy? The other awesome thing about Brotherhood is the fact that you can train citizens that are being oppressed to become assassin’s and call on them when you’re in battle to help you out or use them to take out a target without bringing attention to yourself.

The entire series is a must play and if you’re looking to play all three, but really do not have the cash to spend, might I recommend picking it up at disc replay? I believe I paid $30 bucks for Brotherhood, since it’s the newest and probably about $10 for the other two, really worth it.

Check back every now and then, I’ll be writing more and more reviews on games!