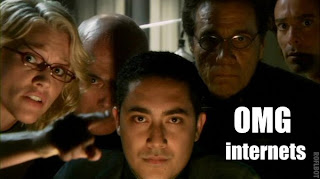 Anyone who knows me even a LITTLE bit knows I’m moderately obsessed with the 2004 re-imagining of Battlestar Galactica. But never underestimate the geekiness–it can prove quite an advantage if you need creative ways to motivate yourself and improve your career edge.

In keeping with this much-reposted article of 10 business lessons from BSG, I’ve come up with 5 more pieces of advice for career-minded individuals. Mind you, there are about a ZILLION nuggets of wisdom I had to choose from. There might be a Part 2 eventually, because it was just very difficult to narrow things down. Here’s what I came up with:

1. Be a leader NOW, don’t wait for fate to thrust you into a leadership role, as Lee Adama did.

Otherwise you’ll find yourself floundering, and being upstaged. Not to mention getting lectured on the subject by your hotshot underling pilot. Do your research, pull your weight, and when the time comes, jump in with both feet. You’d do better to take example from Pres. Roslin than from the younger Adama. Be appropriately authoritative. 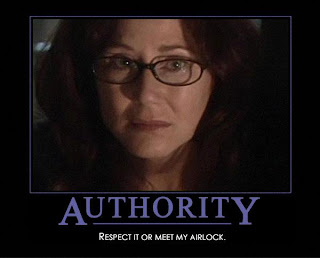 2. Be adaptable, unlike Felix Gaeta.

You NEVER know what turn life will take you in, what new tech might come up or what person you dismissed in the past who may well be a powerful ally in the future. Gaeta couldn’t accept when a few of the hated Cylons changed colors and allied with the Colonial fleet. His actions as a response led to humiliation, failure, and… well, death by firing squad. Your result if you fail to be appropriately versatile will likely not be anywhere near so drastic. But it WILL be painful at best.

3. Keep your moral compass, even when it’s frustrating.

Like Karl “Helo” Agathon, who stood his ground beside his Cylon wife until the pair proved themselves two of the fleet’s most valuable officers. He also risked his respectability to stop a genocide of members of the Sagittaron colony by a crooked doctor. He stood his ground amid scoffs and threats on all fronts, even from people he’d known as friends. In the short run, these actions hurt. But it was worthwhile to hang on to his integrity. Galactica’s Doctor Cottel tested a deceased Sagittaron’s blood and proved Helo’s theory correct. The truth eventually will prevail. That inner voice of right and wrong is a vital tool in a sometimes-murky professional environment. Never lose that.

4. Learn from past mistakes.

“All this has happened before, and all this will happen again.” These words recurred throughout the BSG series, first uttered by the Cylon Leoben, and unwinding as a thread as the human/cylon confrontations increased in complexity, intensity, and risk. By the series’ end, we are left to make our own conclusion as to whether the cycle of destruction has been broken, or will repeat yet again. It may not be as dramatic as obliterating your own civilization over and over on a 3-thousand-year loop, but it’s still vital to examine the past, and its errors. That adage about being doomed to repeat history if you don’t learn from it is all too true. If you see that your course of action isn’t leading to your desired end — be it a promotion, growth of your small business, or landing that new job — or if you’ve made the same wrong moves more than once, stop the loop and re-evaluate.

5. Never understimate the power of respect.

All through the BSG series, this proved a recurring theme. Admiral Adama’s leading hand was firm, stern, but ultimately considerate of his crew and fleet’s needs. Galen Tyrol upheld a more just socioeconomic system among the fleet by standing up for inter-colonial respect and class mobility. Admiral Cain’s megalomania and lack of regard for the humanity of her own crew led to her demise. And, the end success of the journey for human and cylon alike ultimately hinged on their ability to understand that they were all in that journey together. Whatever your company, whatever your role therein, it’s not an overstatement to say that your success rate depends in large part on you, unfailingly, both giving and demanding appropriate respect at work. (Hey, it just may keep your entire civilization alive!)

Hopefully, you can take these themes into consideration and use them to improve your performance. So say we all.

…Upon further thought, yes, I am definitely going to make a part 2. Career tips girls and women can gain from Battlestar Galactica. It pretty much needs to happen, because the “women rock” theme is so heavy in the new series. Also, this blog needs more Starbuck. So stay tuned for that.