Today we celebrate two years of Altered Thurzdaze with Ajapai from Japan. Next week is Signal Path. This is a big night for IndyMojo due to Altered being a major contributor to the success and growth this night has given the scene and for Mojo over the course of the past two years. There is just not your run of the mill dance night. It hosts talent from all over the country and now all over the world. Come join us tonight to celebrate the memories we have shared and the friendships we have made. This would not be possible without you guys. This is our thank you to you.

2 years ago this month IndyMojo had the opportunity to expose Indianapolis to more music. Located at The Mousetrap Bar and Grill (56th and Keystone) every Thurzday has now become the biggest EDM weekly in the area. Showcasing local and national talent each week and only growing more and more in size. “The idea was sparked as we were gearing up for Mojostock 2010 (2nd Mojostock, and the 1st that included an EDM stage). We could see the cross-pollination of the jam and electronic scenes in the festival circuit and saw an opportunity to do something similar in Indianapolis. With us (Matt Ramsey and Jason King) being fans of both scenes, it made a lot of sense. The Mousetrap wanted us to come in and do more things, so when the opportunity presented itself, we decided to see what we could do to grow both scenes from the home base of the jam scene” – Matt Ramsey (Promotions Director IndyMojo) 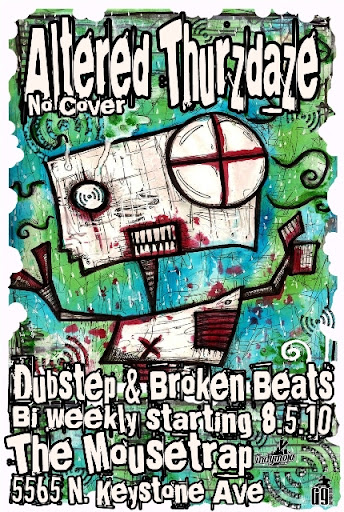 Well that idea has made a heavy impact on the scene we have in Indy today. If it were not for Altered Thurzdaze who knows if we could have seen the acts we have today and at the price of just $5 for national and international headliners. Most nights are free entry for all. Only when Mojo started bring in bigger act did they actually have to start charging at the door. This also opened the door to bigger names in the scene. The night started as a bi-weekly and then started to be weekly after time and alternating between jam bands and edm nights. After the realization that EDM was becoming the more popular of the two, the focus shifted directly towards it.  Bringing you high quality production each week. Growing into pack houses at every major event and on some local nights as well, made it something we could never have imagined.

The main residents at AT have been pretty much the same throughout the course of the 2 years. Psynapse, Kodama, and Hollow Point were the first residents to take the stage at the Trap on August 5th, 2010 at the first Altered. Kodama and Hollow Point are still to this day the main residents each week and have become very popular names, even regionally as their duo name Mutiny. Cyberoptics was the first national headliner to play an AT. Mojo wanted to see what it would take to get people attention so they did it with free entry. Ever since then the shows have gotten bigger and bigger each month. When bringing Heyoka they had to start charging a cover, but at a mere $5. In March 2011, the Heyoka show was the first major show I attended. The place was packed, I had never seen the Trap so busy.

The next big show to come was Claw of Hulk.The crowd was more intense than ever before. Lines at the bar were overwhelming and the lights and sound were the best I had seen in years. I actually was dancing so hard my knee popped out of socket and had to leave the show early. Around August of 2011 I joined up with IndyMojo and became a part of this great night every week. The next big show in 2011 was old school Drum and Bass DJ Odi. It had been 10 years since I last saw him and it was just as magical as I remembered back then. Many of the shows in 2011 we local and regional acts. AT paved the way for a lot of talent to get future bookings elsewhere. As the popularity grew so did the shows. 2012 has been a staple for just that. The Highlight of that year for me was most definitely the free Crizzly show. To me this was just crazy that someone this big could be playing a big show for free. Following that show was Elliot Lipp and Samples. Mojo is notorious for bringing you the best bass music at a fair price.

2012 brought a whole new crop of talent to the Trap. Starting out the year with famous breaks DJ Curtis B and then casually into festival sensation Ana Sia. The train didn’t stop there with BARE hitting the trap the 1st of March. That show was the biggest show to date at the time. Now that seems like not as big of a deal with what came after whats to come.

This year’s acts have also included Secret Panda Society, NastyNasty, and Sluggo. With Dieselboy, Elite Force, and LTJ Bukem still to come. . The heart of it all is Thurzdaze and the family it has created within the regular goers. The people are the biggest part of what makes this night so unique to any other. There is a strong net of people who never miss a Thurzday if they can help it and that is what drives Mojo to keep doing this. Without the love and support of all the beautiful faces each week it wouldn’t be the same. Thank you all for the support you have given this night each and every week.

You should plan to see more amazing Altered Thurzdaze the rest of this year and in 2013.